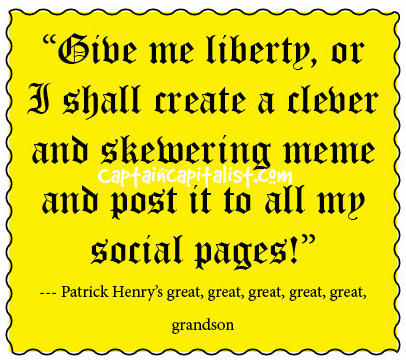 Bright sides and Green Chutes as 2013 comes to a close

For those of us who are free market capitalist types, this may be the "Winter of our discontent" but that means that Spring is just around the corner. There are signs that point to very good things ahead for liberty, vibrant markets and improved quality of life.

The phenomenon of the role out of the Affordable Health Care (Obamacare) is one great example. It's still possible to win elections and even get legislation passed using the tried and true spin machine, back room dealings, double speak and out right deception. But fudging beyond the actual implementation is almost impossible now. Especially when that implementation affects so many people so directly. The rise of the Internet, mobile and social media has made the spread of information and opinion from one coast to the other, almost instantaneous. You may believe you have only impacted 5% of the country, but once the posting, tweeting, sharing and emailing is done, 100% of the country is going to know about it and form and opinion about it. So long as we have freedom of speech and information flow, even the worst of ideas can be corrected in increasingly short order. This bodes well for almost everything and everyone going forward.

The unveiling by Amazon.com of their project to provide 30 minute delivery of products via drone has caused some excitement and some concerns. There are a number of issues that come up around it, but none of them are technological. Most have to do with how to manage a crowded sky or ensure privacy, not with how to make it technologically feasible on a commercial scale. It already is. Technology has gotten to a point where it is now progressing faster than we can develop protocols to accommodate it. This is also a good trend. It increasingly puts control of the product and service mix back in the hands of the producers and end users and takes it out of the hands of gate keepers and regulators. Soon, 3-D printing technology may well make banning individual products totally moot. If you can draw it or imagine it, you can have it.

The rise of alternate currencies like Bitcoin is another hopeful sign. As it turns out, creating and managing currency on a global scale is not something that is over the heads of everyone except the most enlightened of bureaucrats appointed by our wisest elected officials. In fact, Bitcoin is open source. It has no Central Banker, and it works. Will it become used by the common man on a daily basis? I don't know, but it did prove the concept. By borrowing more than they can ever hope to repay, leaving hyper-inflation as their only way out, governments have long counted on the fear of currency collapse to encourage people to "whistle past the graveyard" and perhaps put more of a value on currencies than they would if there were an alternative. If we develop a competitive, private global market of easily exchanged currencies, they can't play that card anymore. Collapse of the government's finances doesn't have to be much more than a temporary inconvenience. We throw the bums out and start over without any total apocalypse taking place.

Maybe the most hopeful sign is the decreasing tendency, especially among young people, to long-term commitment to a political party. Policy makers have lots of grand plans and schemes that they are confident will create a better world, if you'll just tolerate the transition long enough. Most of those plans involve taking money from one group and giving it to another. However, they pretty much completely ignore the aspirations of people who want more than a hand out and more than mere survival. You don't tell an ambitious teen ager in America "You only need a little success." Call it the American Dream, call it human nature, but a good portion of the population will not accept limits on their imagination, dreams and drive. They want to be free to do what they want to do. Even if they don't have well refined notions of the proper role of government or the private sector or informed positions on policy questions, they know what they like. What they like is things that work. What they don't like and don't have to accept is mediocrity. Some will, but they will be pushed aside by those who want more.

It all comes down to freedom. Freedom is what gives us the capacity to try new and different things. Freedom is also what give us the capacity to self-correct and it's much more efficient and a lot less bloody than the alternative. If we can only agree on one thing as Americans, it's that freedom must be preserved above all else, because even if you get all else wrong, freedom will let you fix it. We will right this ship, not because of a political party platform or some new legislation, but because of us; because we still give each other the right to be wrong so long as no party introduces force.
Posted by Ed Duffy at 10:05 AM No comments: